A little bit of everything, all rolled into one

So yesterday I arrived back in grey, chilly Amsterdam, after two weeks of travelling through Cuba.

To my Dutch readers: I will write this series of blog posts about Cuba in English, so the travel mates I met along the way are able to read it too, if they like. (To the native English speakers among you: there might be some grammar mistakes in this post, for which I am sorry… I love writing but I’m not really used to writing in English anymore.) 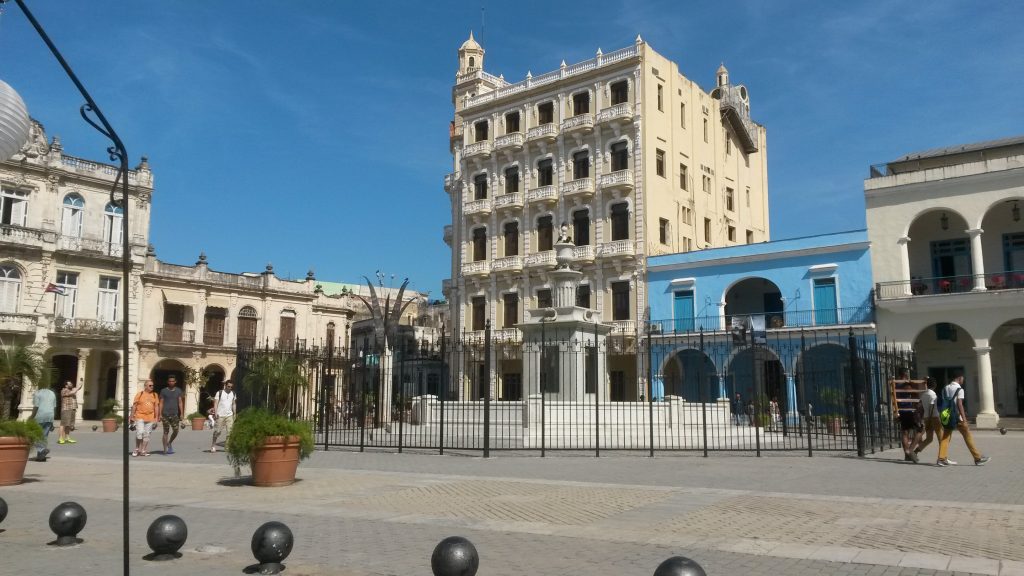 OK, so you might remember my latest blog post – the one about me being all scared and ‘why-the-hell-did-I-want-this-again’. Of course, I knew those OMG-HELP-WHY-feelings are part of travelling, especially when you go all by yourself. But let’s be honest, the moment I packed my stuff I wasn’t really sure anymore whether going to Cuba was indeed such a good idea. Couldn’t I just have chosen to spend these two weeks at some random beach resort?! That would have been so much easier, right?

Naturally, I was totally wrong. I had a GREAT time in Cuba. and I’m so glad I travelled around the (western part of the) island. In fact, the whole trip was so much better than I could’ve hoped for… I would definitely recommend people to visit this intriguing island (although some good preparations are in order – but I’ll come back to that later!).

On Thursday, January 19th I woke up very early to kiss Tom goodbye. Not me, but he was leaving very early today – he’d go with a friend to Paris for a few days (which was quite funny, because I had a transfer in Paris as well, only a few hours later and at a different airport).

Around 10 AM I checked my backpack one last time (it was 17 kg, quite heavy, but in my defense: I brought quite a lot of food, like crackers/nuts/dried fruits, which I would eat along the way) and took a train to Schiphol Airport. It was -5 degrees Celsius outside, but of course I didn’t want to take my winter clothes with me, so I decided to wear all my jackets at the same time – which kind of worked out. 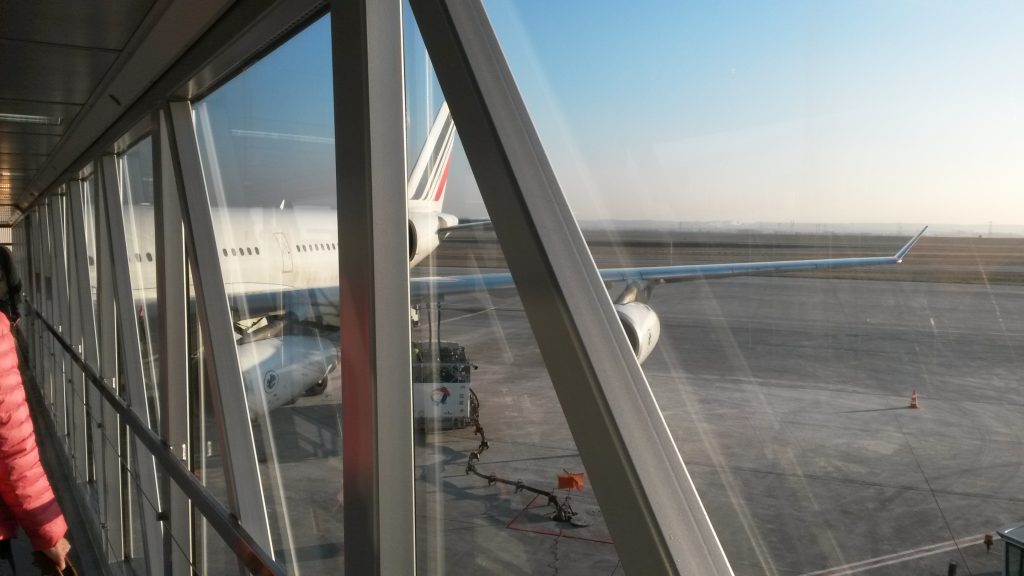 Fast forward to about 15 hours later. At 9:25 pm the Airbus 330-300 landed at José Martí International Airport. It was amazing to see Havana from the air during night-time; the sparkly, yellow-ish lights reminded me of old lanterns and candles. “Havana is one of the few cities of the world that’s still quite dark at night”, said the man next to me when he saw me looking.

It was Wilfredo speaking, the first friend I met on this trip. Wilfredo is Cuban, but he’s lived in Spain for over twelve years. During the >10 hour-flight we had talked a lot in both English and Spanish, and he’d already given me some useful tips (‘never give in to any of the Cubans who wander around in the tourist areas…there are a lot of friendly and genuine people in Cuba, but at daytime they’re at work, not stalking tourists’).

After we waited for another 30 minutes before we could taxi to the gate (waiting is jokingly called Cuba’s national sport, and during this trip I would get quite a lot of it…well, guess it’s not a bad thing for me to practice my patience). Wilfredo suggested he could give me a ride to my hostel, since he was going to rent a car at the airport. Nice! Not only would that be faster, we could also continue our talks and it would save me 25 CUC for a taxi (= about the equal amount in euros).

Of course, a small voice inside my head whispered: is it really a smart idea to get into a car with a man you barely know? But my gut feeling said Wilfredo could be trusted, and when I saw him meeting his brother in the arrivals hall, I knew this wasn’t someone who would try to harm me. 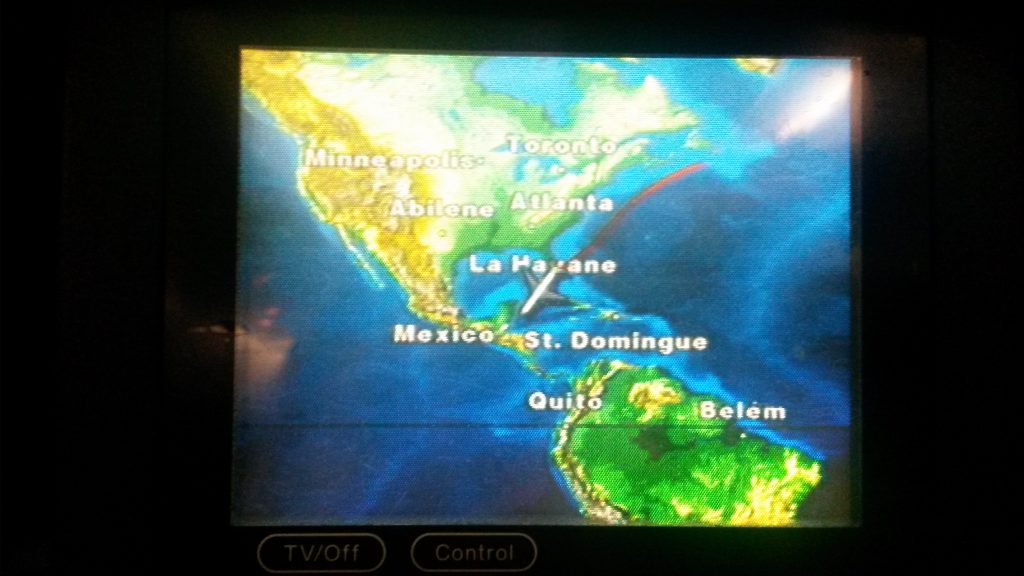 My assumption though, that joining Wilfredo and his brother would be a ‘faster’ way to get to my hostel, appeared to be an uh, huge mistake. We waited for more than 1,5 hours (not kidding!) at the rental car office. It was way past midnight by then, and I was almost at the point of getting a cab anyway, when we finally got the keys of the car. But hey, it wasn’t cold outside, I had some crackers with me to eat and I could practice some more Spanish by talking to the two brothers. ;)

Long story short: just after 1 AM (Friday, January 20) my new friend dropped me off at Rolando’s Backpacker Hostel, where an old man opened the door for me and walked me to my room.

HOW DO YOU WANT YOUR EGGS?

After quite a short night – stumbling roommates, warmth, street noises, etc. – I had breakfast in the hostel. A kind lady served me eggs (revuelto appears to be the word for ‘scrambled’) and while I ate the fresh fruit that came with it, I met a few others – among who another Dutch girl who had already stayed in Cuba for a few weeks. 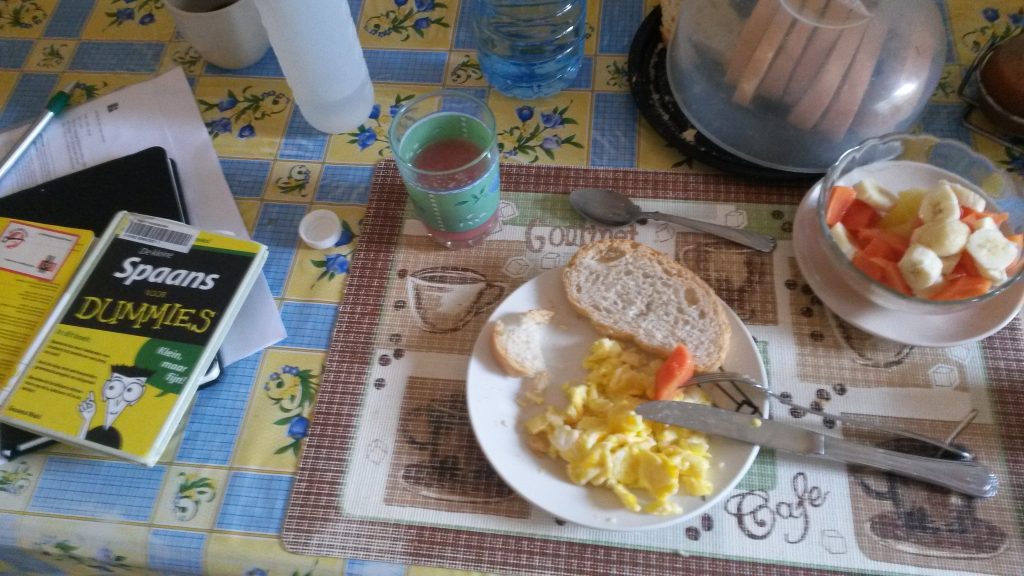 I had a few plans for this Friday:
1 – explore Havana
2 – fix some bus tickets for jan 27 (Cienfuegos-Trinidad) and feb 1 (Santa Clara-Havana)

But first, hostel owner Enrique called me to his office, where he explained me EVERYTHING about the city – in Spanish. (I was happy to discover I could understand him quite well.)

Oh, Havana.
I’ll never forget the moment I opened the front door of Rolando’s. The night before, the street had been silent and empty. Now, it was all sounds and colors and scents and people. Wow! 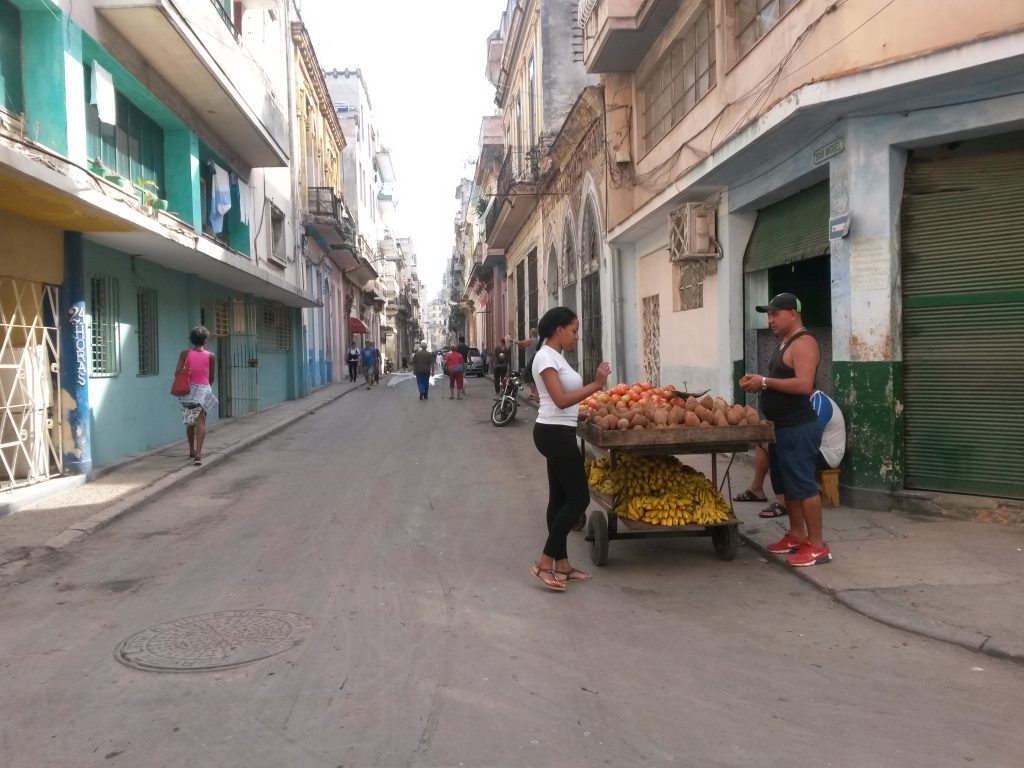 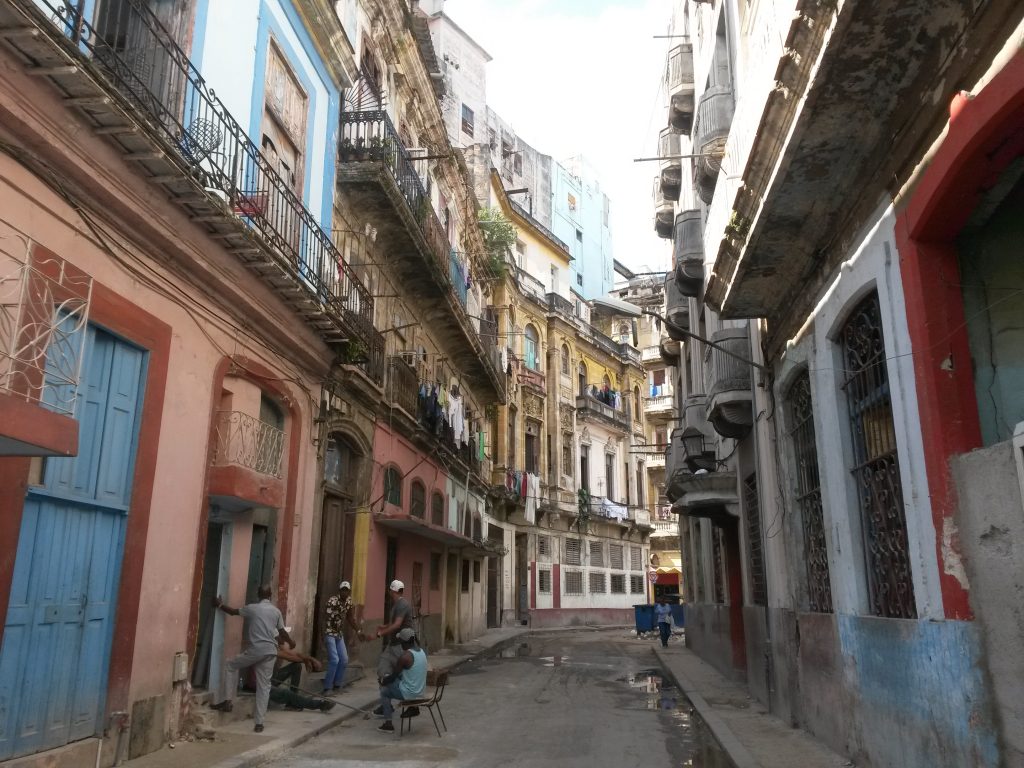 I decided to walk in the direction of Habana Vieja, the old city centre that was supposed to be very beautiful. But once I got to Parque Central – the central park that lies west of it – I decided it would be better if I fixed those bus tickets first. I didn’t have a ticket yet for my last bus ride, the one from Santa Clara back to Havana. And since I had to take that bus just a day before my plane home would depart, I wanted to make sure I could indeed get one….

The line above is one I would hear MANY more times in the next two weeks  – until it would start to annoy me and then a bit more. But at this point, I was just happy I found a cab – and yes, it appeared to be one of those (kinda illegal) oldtimer taxi’s! I bargained a bit and got to the Viazul bus station – which was about a 15-20 minute ride – ánd back for a good price. The driver, a 24-year-old guy, even waited for about 1,5 hours while I was trying to get the ticket. (Yes, I practiced the national sport again.) Oh, and the driver asked me out during the ride home – quizás, ‘maybe’, is an answer to many questions.

By the time I was back at Parque Central, I had gotten quite hungry, so I decided to walk to Café Bohemia, a nice place at Plaza Vieja that was recommended by fellow-blogger and Cuba-lover Edith. Just when I started eating my sandwich, a girl walked up to my table. “Hi, may I join you?”

Natalie from London appeared to be a very cool girl who, like me, works as a copywriter. She’d already been in Cuba for a few weeks and she could tell me a lot of useful stuff (like where & how I could get WiFi!) – and apart from that, we had a really nice chat about life, travelling, love and other stuff. We decided to spend the afternoon together and walked a bit more through the small streets of Habana Vieja. 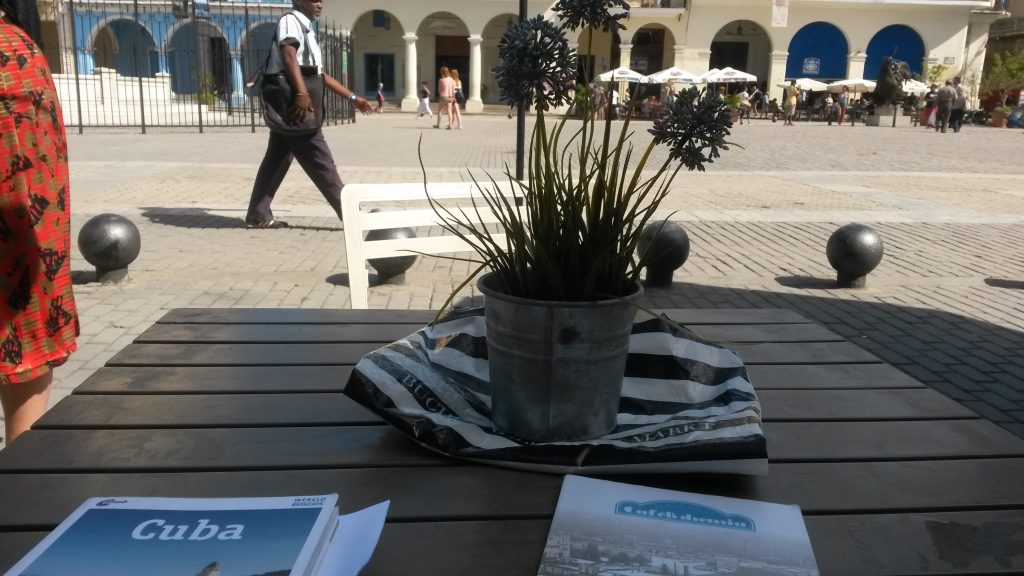 For a few CUC I enjoyed dinner and a mojito (okay, two) at the hostel, that had a nice rooftop bar. There were many other interesting travelers, among who a group of American guys and some Germans I had a nice chat with. We decided to go to a club at night, but in the end I felt too tired (jetlagged) to dance/get drunk/stay up late, so around midnight I decided to leave the Miami brothers (three guys who flew over from Fort Lauderdale for the weekend to party in Havana) to their drinking feast. ;)

On Saturday I wanted to go to the beach. Luckily, a few others wanted to join me so in the morning we bought a bottle of Havana Club 3 yrs and got a taxi collectivo (for 3 CUC p.p.) to the Playas del Este. The beach called Mar Azúl (blue sea) was very nice; clear water, palm trees, coconuts filled with rum.

It may be clear it was a day well-spent. 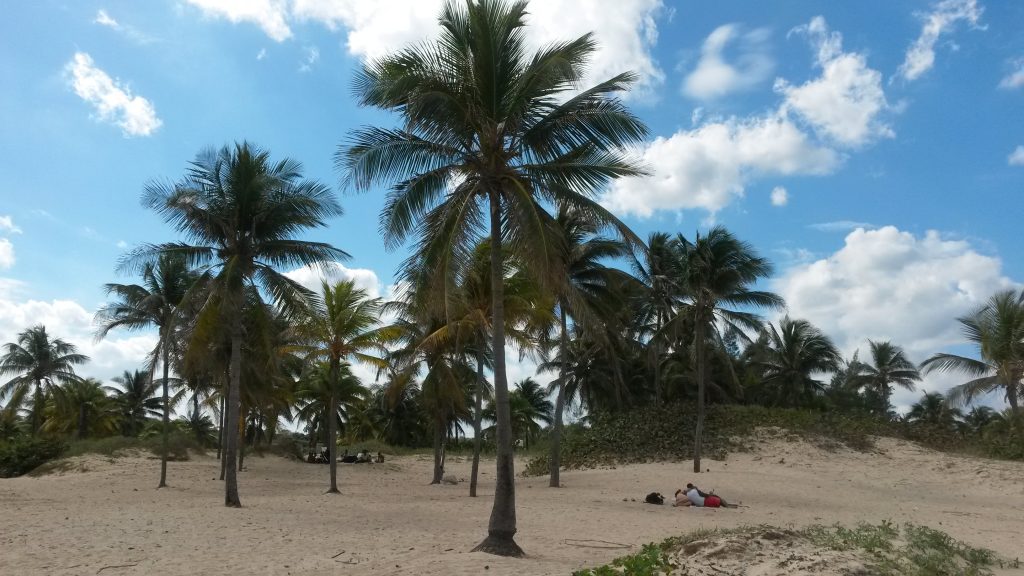 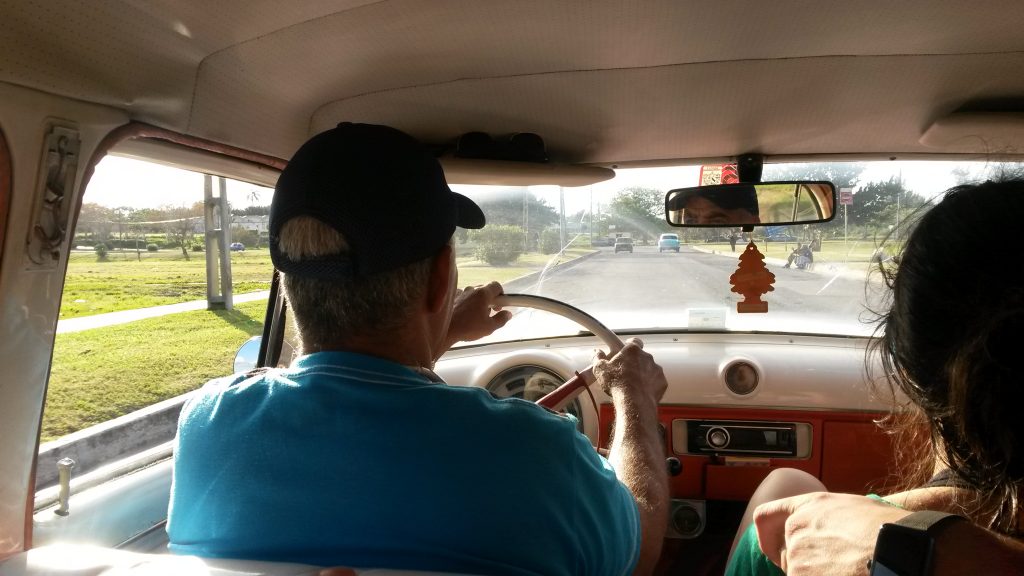 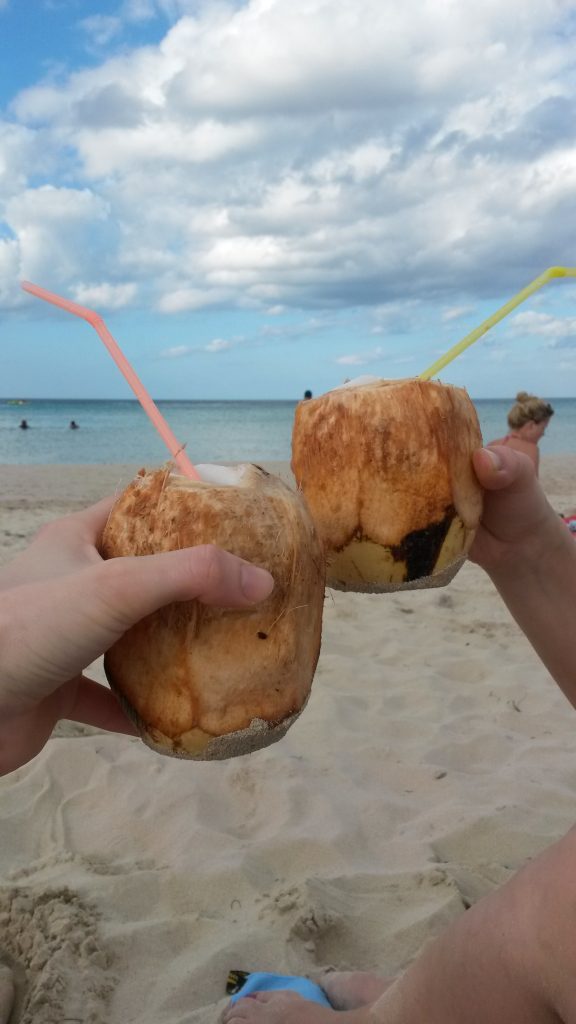 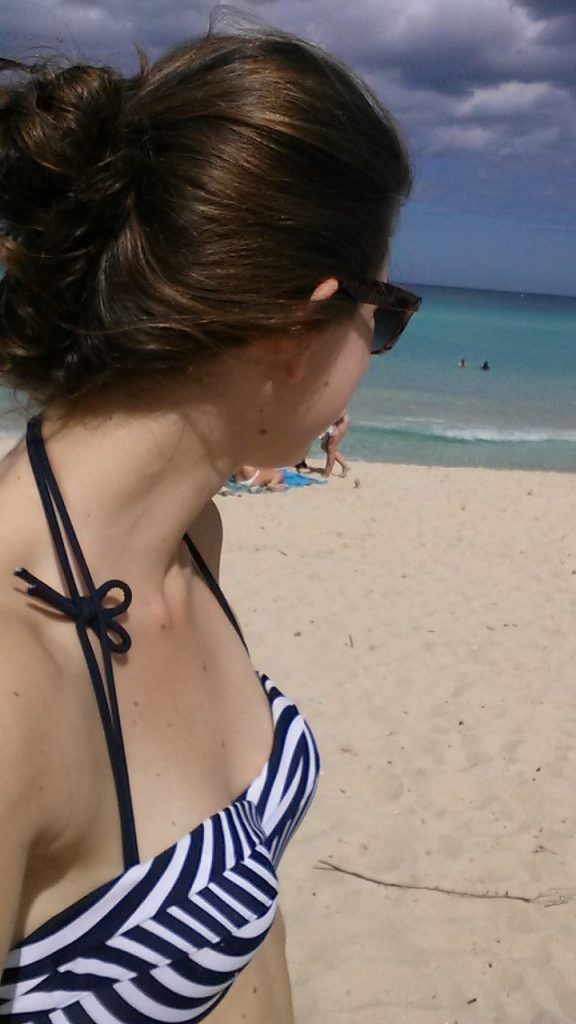 Sunday – the last day before I’d leave for Viñales! – I woke up ‘early’ again (around 8) to join the Havana Free Guided Tour. A few people at the hostel had talked about it very enthusiastically – they told me there were these two very driven guys who’d just started daily free walking tours around the city. “We walked for almost 5 hours straight, but it was totally worth it”, a Brazilian girl told me.

So at 9:30 me and three others from the hostel went to Parque Central to try and find these tour guides. Luckily we were just in time; Jaime and Frank welcomed us and there we went, into Habana Vieja again.

And o man, I would definitely recommend this tour to anyone. Yes, it’s quite a walk, but we got to see só much, including a lot of interesting details, like hotel rooftop bars, cool architecture and a boxing arena. Jaime – who spoke for more than 4 hours in very fluent English – even took us on a local ferry, to the other side of the bay, where we got an amazing view over the city, and he dragged us into a Cuban bus (as in: a not-for-tourists-bus) to get back to the city centre. He also had a lot of good recommendations for nice restaurants/bars around town and wasn’t afraid to talk about politics or answer critical questions. 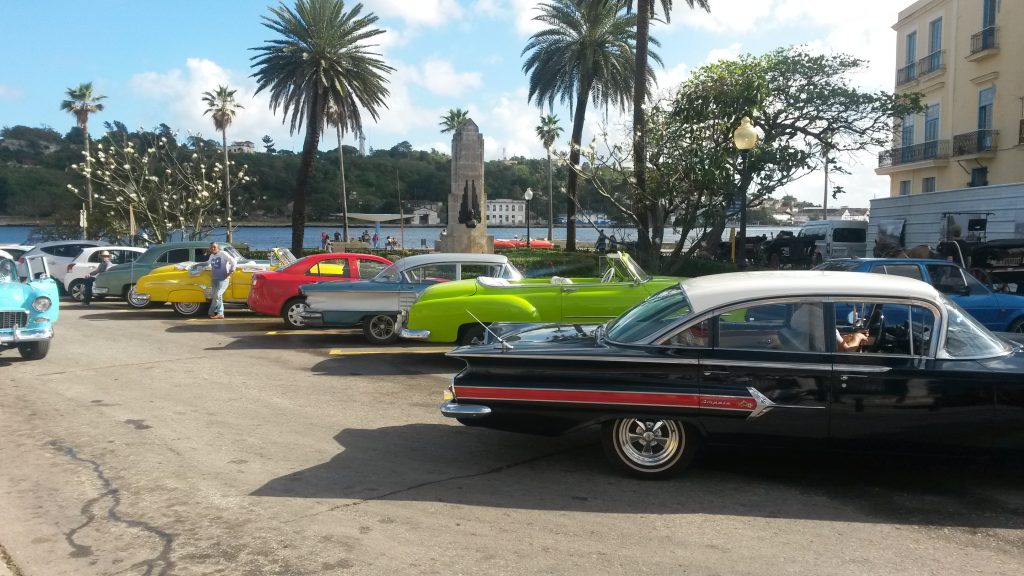 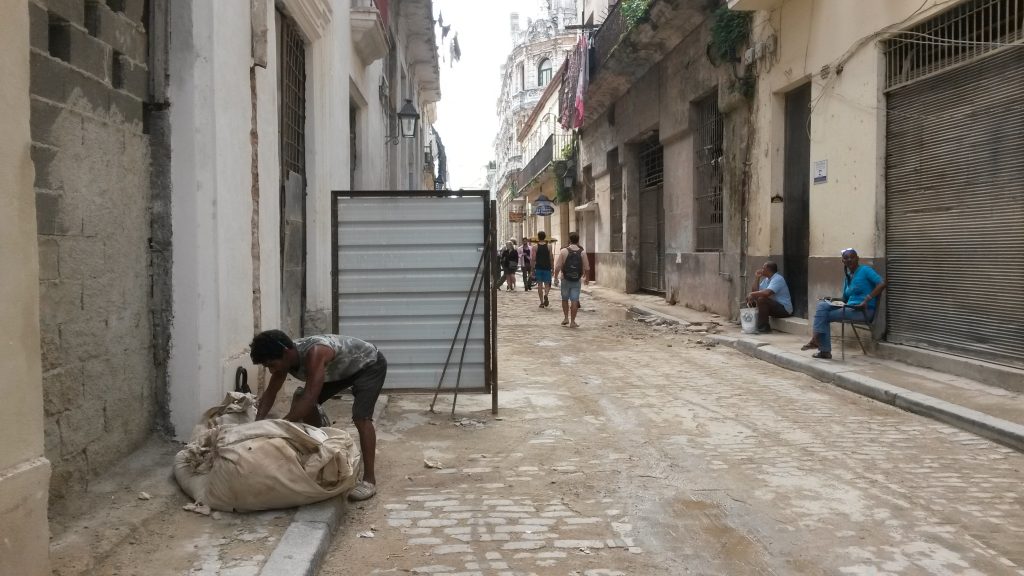 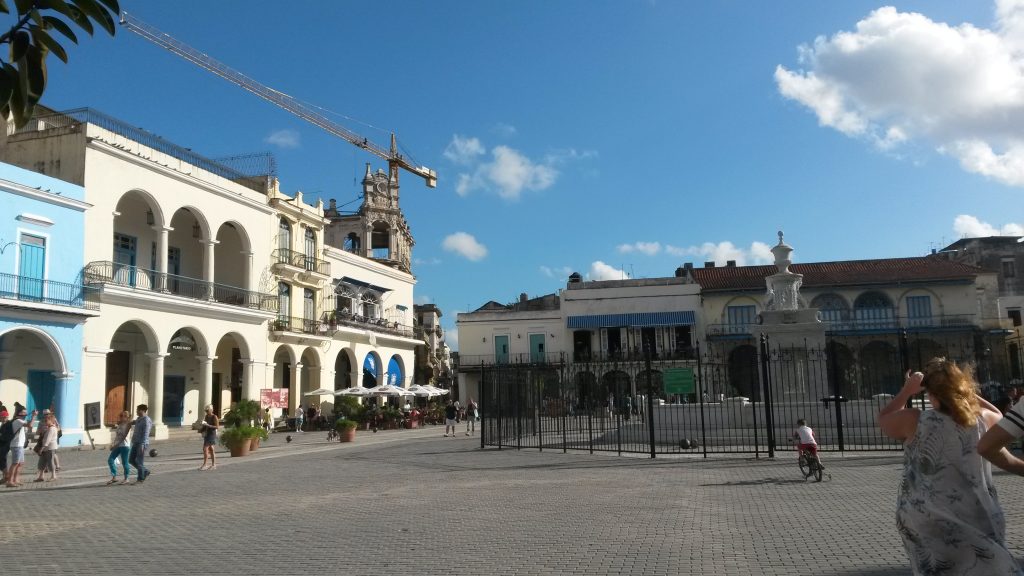 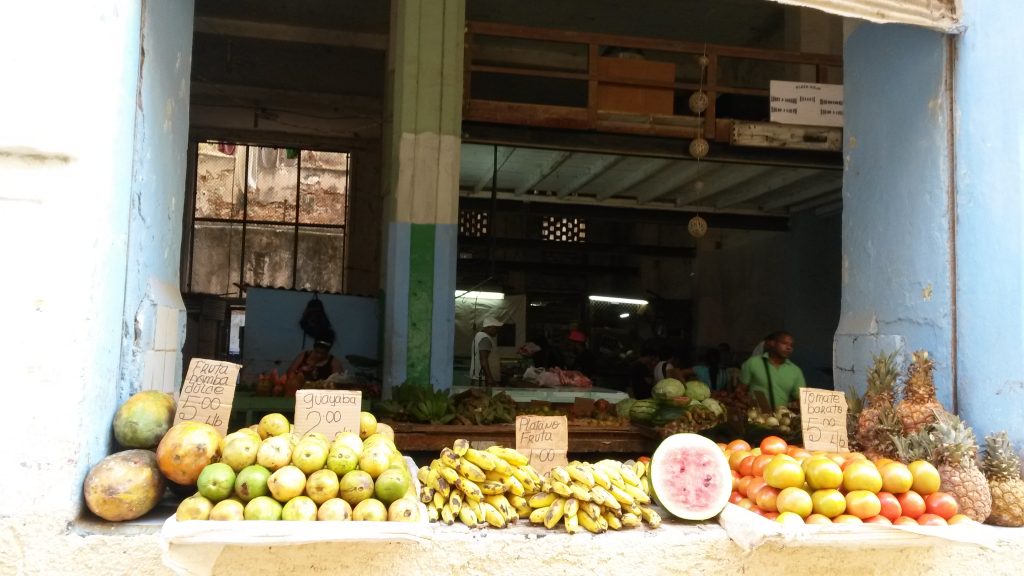 Go check these guys out – they’re amazing and they deserve their business to be a succes. (Yes, it’s a free tour but of course you’ll give them a decent tip afterwards!)

At the end of the day, me and some others walked to the Malecón, Havana’s roadway boulevard, to enjoy the sunset. After a peso pizza (more on that later) I spent the rest of the evening, again, at the rooftop bar of the hostel. I mean, why would I go anywhere else if there are nice cocktails and good company at Rolando’s? 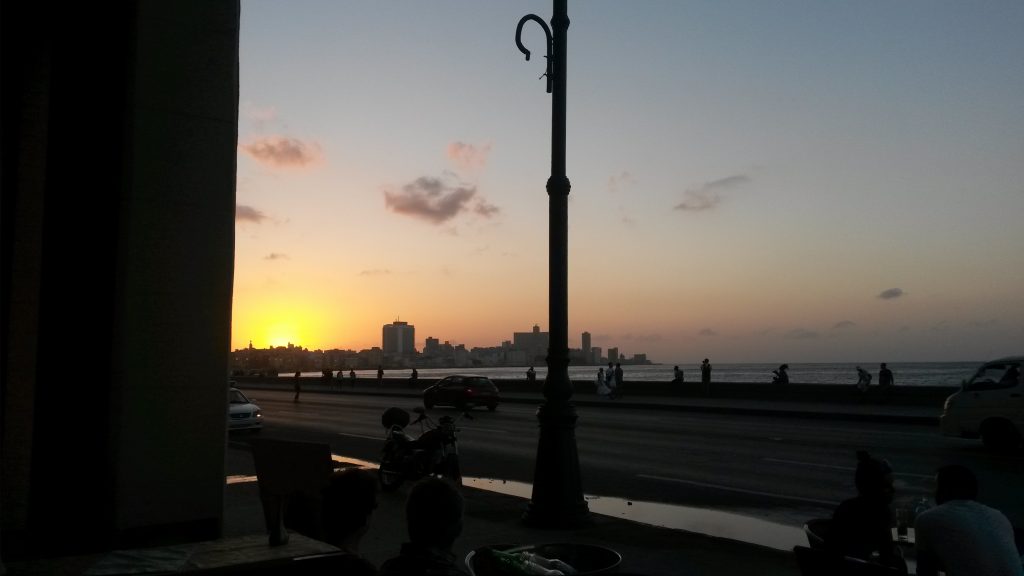 The next day I got a taxi at 7 AM, that dropped me off at the Viazul bus station. I didn’t feel like leaving Havana yet, but I also wanted to see more of Cuba. Next stop: Viñales! 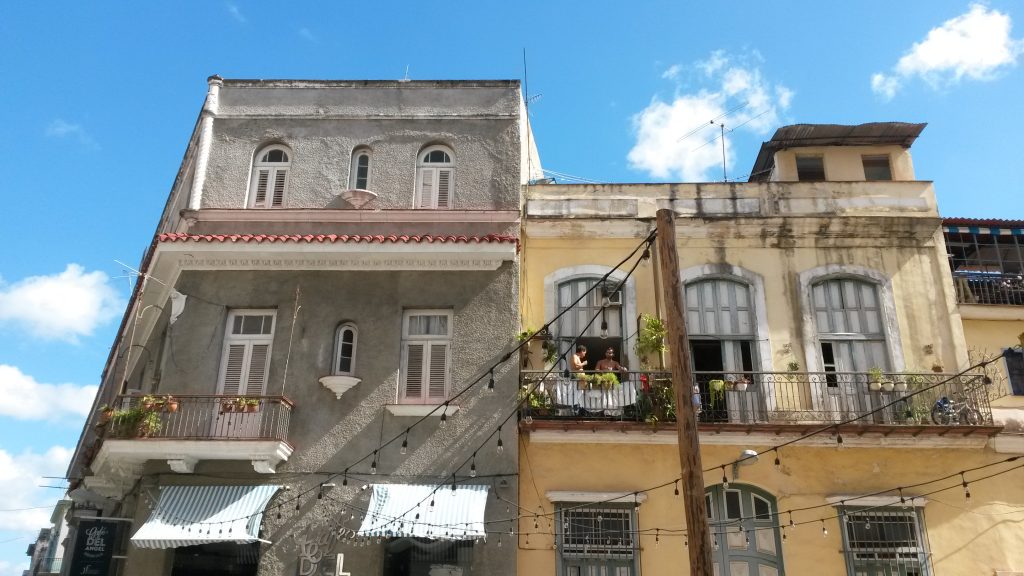 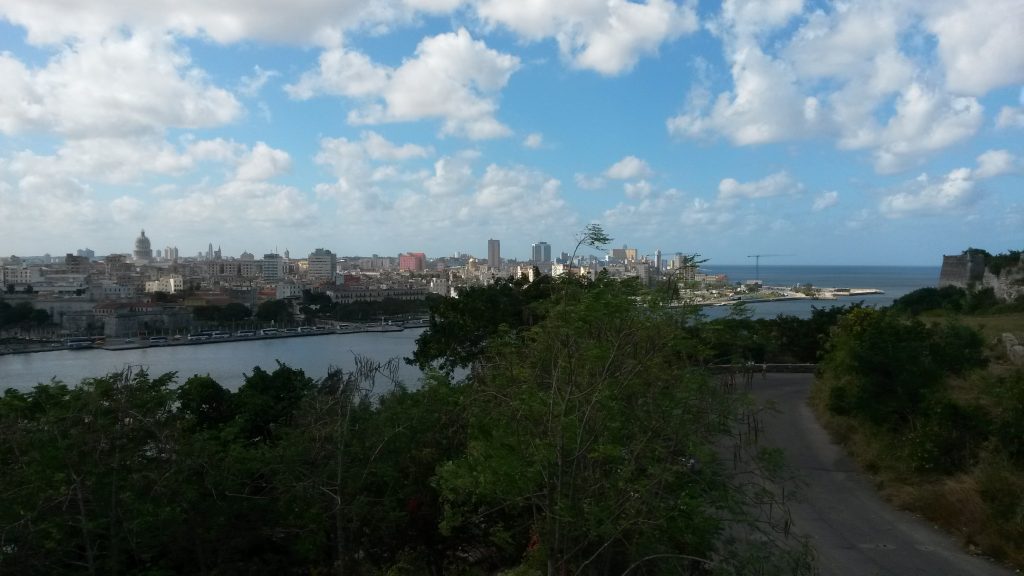 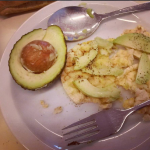 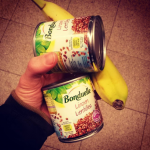 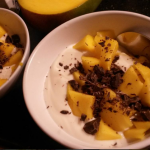 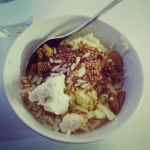 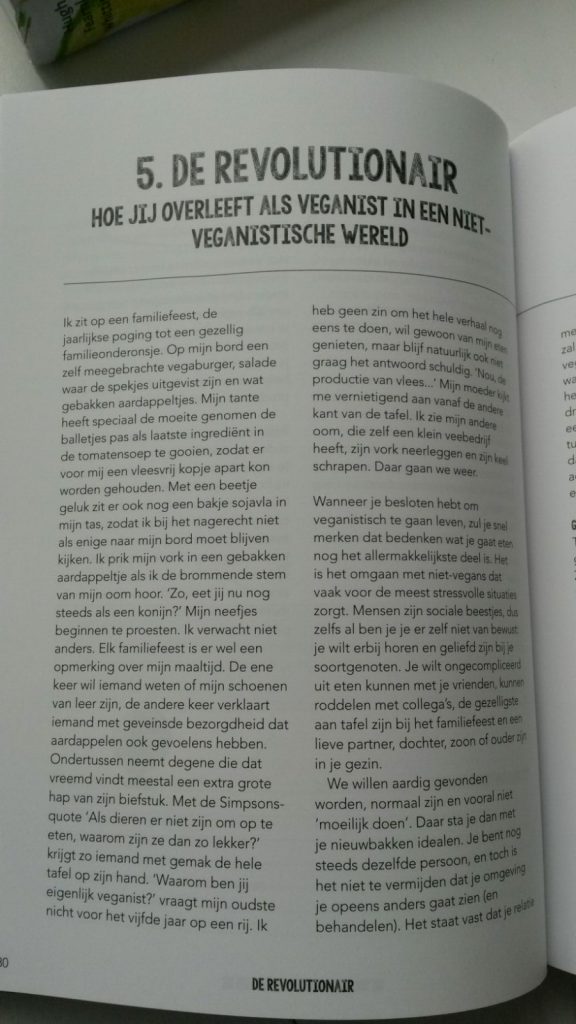 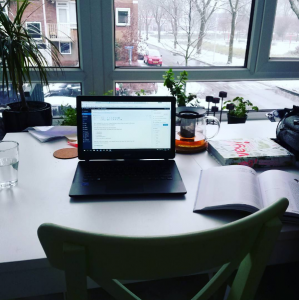